Forget the Price of the Home. The Cost is What Matters.

Presented as a public service by Joe Peters of Coldwell Banker

Home buying activity (demand) is up, and the number of available listings (supply) is down. When demand outpaces supply, prices appreciate. That’s why firms are beginning to increase their projections for home price appreciation going forward. As an example, CoreLogic increased their 12-month projection for home values from 4.5% to 5.6% over the last few months.

The reacceleration of home values will cause some to again voice concerns about affordability. Just last week, however, First American came out with a data analysis that explains how price is not the only market factor that impacts affordability. They studied prices, mortgage rates, and wages from January through August of this year. Here are their findings:

“The 0.85 percentage point drop in mortgage rates from January 2019 through August 2019 increased affordability by 9.7%. That translates to a $40,200 improvement in house-buying power in just eight months.”

When all three market factors are combined, purchasing power increased by $24,500, thus making home buying more affordable, not less affordable. Here is a table that simply shows the data: 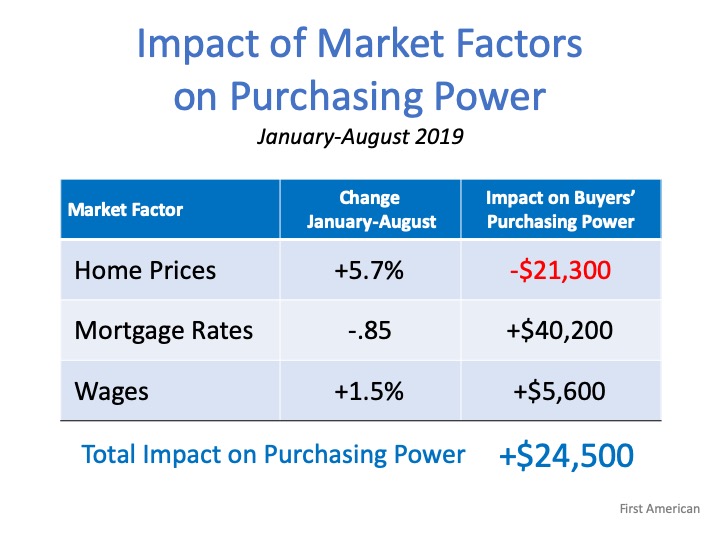 In the article, Mark Fleming, Chief Economist at First American, explained it best:

“Focusing on nominal house price changes alone as an indication of changing affordability, or even the relationship between nominal house price growth and income growth, overlooks what matters more to potential buyers – surging house-buying power driven by the dynamic duo of mortgage rates and income growth. And, we all know from experience, you buy what you can afford to pay per month.”

How Interest Rate Hikes Will Trigger The Next Financial Crisis

On Wednesday, the U.S. Federal Reserve hiked its benchmark interest rate by a quarter-percentage point to 2% – 2.25%, which is the highest level since April 2008. As rates continue to climb off their post-Great Recession record lows, market participants and commentators are showing almost no signs of fear as the stock market is hitting records again and complacency abounds. Unfortunately, “soft landings” after rate hike cycles are as rare as unicorns and virtually all modern rate hike cycles have resulted in a recession, financial, or banking crisis. There is no reason to believe that this time will be any different.

As I’ve explained in the past, periods of low interest rates help to create credit and asset booms in the following ways:

When central banks set interest rates and hold them at low levels in order to create an economic boom after a recession (as our Federal Reserve does), they interfere with the organic functioning of the economy and financial markets, which has serious consequences including the creation of distortions and imbalances. By holding interest rates at artificially low levels, the Fed creates “false signals” that encourage the undertaking of businesses and other endeavors that would not be profitable or viable in a normal interest rate environment.

The businesses or other investments that are made due to artificial credit conditions are known as “malinvestments” and typically fail once interest rates rise to normal levels again. Some examples of malinvestments are dot-com companies in the late-1990s tech bubble, failed housing developments during the mid-2000s U.S. housing bubble, and unfinished skyscrapers in Dubai and other emerging markets after the global financial crisis.

Though it can be difficult to tell precisely which investments or businesses are malinvestments in a central bank-distorted economy, a quote by Warren Buffett is extremely applicable: “only when the tide goes out do you learn who’s been swimming naked.” For the purpose of this discussion, “the tide going out” refers to rising interest rates. The mass failure of malinvestments in an economy as interest rates rise typically results in recessions or banking/financial crises.

The chart below shows how recessions or financial crises have occurred after historic interest rate hike cycles:

Here is a list of historic recessions, banking, and financial crises that have occurred after interest rate hike cycles (this list corresponds with the chart above):

All of the modern interest rate hike cycles we have examined resulted in recessions or financial crisis, and the current one will be no different. This time around, it will be the “Everything Bubble” that bursts. “Everything Bubble” is a term that I’ve coined to describe a dangerous bubble that has been inflating in a wide variety of countries, industries, and assets – please visit my website to learn more. After nearly a decade of ultra-low interest rates, the U.S. and global economy are saturated with bubbles and other distortions that will only be revealed by rising interest rates. Because of our record debt burden, interest rates do not have to rise nearly as high as in prior cycles to cause a recession or financial crisis this time around.

Here are some examples of interest rate-sensitive sectors that I believe are experiencing bubbles that will burst as interest rates rise:

U.S. stock market investors are dangerously exposed to coming busts in interest rate-sensitive sectors, which will spill over into the highly-inflated stock market. Please read my U.S. stock market bubble report in Forbes for more information. The S&P 500 has risen over 300% since March 2009 due to the Federal Reserve’s market manipulation:

The current interest rate hike cycle won’t end any differently than the others discussed in this piece – if anything, it will likely end in an even worse manner because interest rates were held at record low levels for a record period of time. The coming recession, crisis, and bear market will be proportionate to the unprecedented imbalances and distortions that have built up in our economy.

3 Tips for Making Your Dream of Buying a Home Come True 3 Ways the GOP Tax Plan Would Affect Homeowners in Hunterdon and Somerset Counties 7 Reasons to List Your House This Holiday Season 2018 A Recession Does Not Equal a Housing Crisis bridgewater First look at UNICOM flemington downtown redevelopment project Homeowner Equity Increased by $908 Billion in 2017 Homeownership Rate Remains on the Rise Housing Inventory Vanishing: What Is the Impact on You? How Long Can This Economic Recovery Last? Hunterdon hunterdon and soerset hunterdon and somerser hunterdon and somerset hunterdon and soomerset hunterdon county Hunterdon County's Real Estate Market Conditions October 2020 Hunterdon County's Real Estate Market Conditions | March of 2018 Radio Broadcast Hunterdon County Real Estate Hunterdon County Voting Instructions as per a podcast interview with Mary Melfi our County Clerk with Joe Peters hunterson and somerset Joe Peters interviews Phil Greiner junterdon and somerset Mayor of Flemington new report says NJ January 16th No Matter What the Groundhog Says... You Should Sell Before Spring! Rent or Buy: Either Way You’re Paying A Mortgage Sizing the 55+ Market in Hunterdon and Somerset Counties Somerset Somerset County Somerset County Real Estate Thank You For Making Me Your Trusted Advisor the Calif. company that bought old Merck building The Cost Across Time [INFOGRAPHIC] The Economic Impact of Buying a Home There Are Tax Benefits With Home Ownership The richest town in each of New Jersey's 21 counties Three Reasons Why Pre-Approval Is the First Step in the 2020 Homebuying Journey Watch Joe Peters Monthly Market Report for February 2018 Where Are Home Values Headed Over the Next 12 Months? Why Selling this Fall May Be Your Best Move Yes